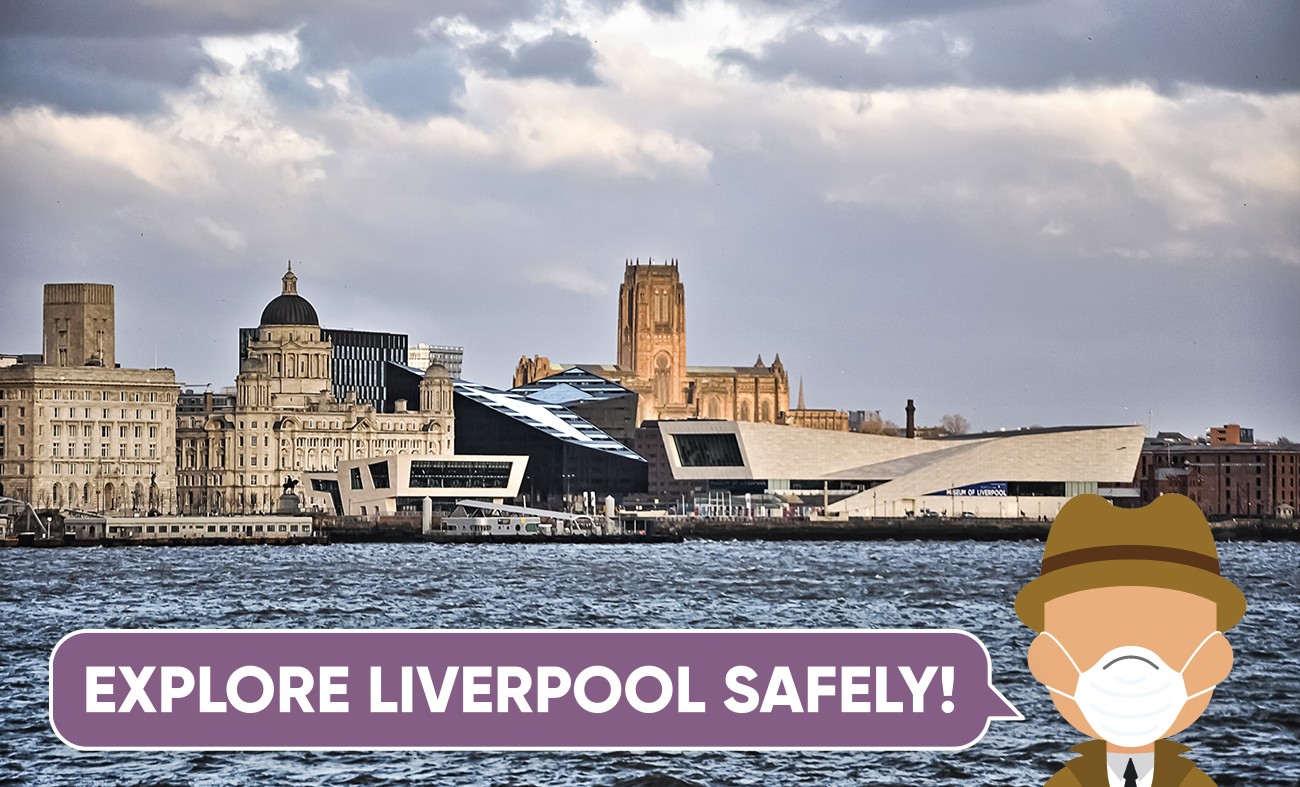 Summer is here, and streets around the UK are starting to look a little less deserted (albeit with a few more face masks in view 😷). As we enter this new phase of lockdown, I’m sure many of you, like myself, are eager to get back out and yet, are acting more on the precautious side.

I had planned to write a series of posts about cool and unusual things to do in cities across the UK. With Covid-19 affecting travel for the foreseeable future, this series will cover the same topic, but with a skew towards points of interest that can be appreciated whilst social distancing.

International travel is looking too risky and uncertain for most people this year. Many sightseers are now turning to domestic tourism to feed the itch. Becoming a tourist in your own city or county doesn’t just offer a surprising amount of opportunities, but by supporting local businesses, it will also help our economy to walk the tightrope it’s teetering on. The great thing is, cities across the UK are full of obscure hidden gems and amazing places, some of which will be right on your doorstep. So, I’m starting off this blog series with one of my favourite cities to visit, Liverpool!

With vast open spaces like the cultural waterfront, grand historic architecture to gaze at and more parks than Paris, Liverpool is an ideal place to walk and wonder (whilst social distancing of course). The city is littered with public art and commemorations to its eclectic history, some of which contain secret messages coded into them. We couldn’t have designed a city better for one of our Murder Mystery Trails (number ten on this list). So, without further ado, here is a list of my favourite cool and unusual things to see and do in Liverpool.

My top 10 Cool & Unusual Things Do In Liverpool:

At the top of my list of weird and wonderful things to discover in Liverpool is the miraculous grave of William Mackenzie marked with a 4 ½ metre pyramid-shaped tombstone.

The legend goes that Mackenzie (died 1851) was an avid gambler and made a deal with the devil to exchange his soul for life-long luck at the gambling tables. After his passing, Mackenzie left instructions for him to be entombed above ground within a pyramid, sitting upright at a card table and holding a winning hand of cards. The aim was to keep his body above ground to cheat satan out of claiming his immortal soul.

Mackenzie’s tomb can be found on Rodney Street, near Liverpool Cathedral and Chinatown. Rodney Street is believed to be the most haunted street in Liverpool with many reported paranormal sightings of William Mackenzie, the famous “Lantern Jaw” spirit and more.

Just a stone’s throw away from Mackenzie’s Tomb is another impressive site to behold. The Church of St. Luke was built in the early 1800s and was a glorious gem in the heart of Liverpool, until it was devastated during the Liverpool Blitz in World War II. When restoration in the city began, the decision was made to leave the stonework shell that survived in its ruined state as a way to permanently remember the victims of the bombing. It is now an obscurely beautiful and tranquil site commonly referred to as the “Bombed Out Church”. The roofless congregation area of the church is often now used for exhibitions, gigs and other events.

The Church of St. Luke can be found at the top of Bold Street, and is a short walk to Mackenzie’s Tomb, China Town and Liverpool Cathedral.

St. James’ Cemetery is said to be one of the most haunted places in Liverpool, with a significant number of ghosts spotted and even a vampire! As you descend into the gardens, you walk under a spooky archway along a path lined with the gravestones of some of the 58,000 people that have been buried here. Liverpool’s only natural spring is also located in St James’ Cemetery gardens. The Chalybeate (contains iron) spring has been shrouded in mystery for almost 250 years with some people believing that the “haunted water” turns black if it’s boiled! St. James’ Cemetery is located right next to the magnificent neo-Gothic Liverpool Cathedral, Britain’s largest church and is also the world’s largest Anglican cathedral.

Mackenzie’s Tomb, Bombed Out Church and St James’ Cemetery are in such close proximity to one another, I highly recommend seeing them all in one go. These three landmarks surprisingly don’t actually feature in our Liverpool Murder Mystery Trail, it’s just how it ultimately worked out. However, this doesn’t mean we won’t come back and do one here! Until then, we highly recommend pairing our Murder Mystery Trail with these three gems.

Our list of cool and unusual things to do in Liverpool fit together in two nice clusters and Bold Street is an ideal segue between them. Few places in the city embody Liverpool’s independent spirit as well as Bold Street does. Stroll along Bond street and admire the tantalising middle eastern restaurants, artisan bakeries, quirky bookshops, boutique fashion shops and some of the best coffee in the city. It’s a great area for both dining in and ordering takeout food and drinks.

Tucked away behind Liverpool’s 18th Century Town Hall is a courtyard full of history and symbolism, belonging to the surrounding building known as Exchange Flags. In the centre is a striking monument to Admiral Horatio Nelson who brought about a number of decisive naval victories during the Napoleonic Wars. On the corner of Exchange Street West is another Grade II Listed Building known as Martins Bank that secretly stored most of Britain’s Gold Reserves during World War II. Whilst Martins Bank is no longer a functioning bank, this regal structure played a key role in the world’s most ambitious movement of wealth and the building is detailed with some fascinating and ornate architectural depictions. A plaque outside the building marks the entrance through which the gold entered and commemorates the bank’s role.

With so much history to absorb in one spot, this made it an ideal spot for the starting location of our Liverpool Murder Mystery Trail.

Liverpool Waterfront is a must-see on a visit to Liverpool. It has stunning architecture, history, culture, art, music and food all in an iconic setting.

Surely everyone in Liverpool has seen the statue of the Beatles on the waterfront. More selfies are taken here than anywhere else in the city. But, I bet most locals aren’t aware of some of the secret details hidden on this monument. I can’t give them away as they’re answers to some of the clues on our Liverpool Murder Mystery Trail, so I guess you’ll have to do it to find out!

A stroll along the waterfront from The Three Graces (the Royal Liver Building, The Cunard Building and the Port of Liverpool Building) up to the Royal Albert Dock is a beautifully refreshing and tranquil walk. There’s so much history and culture to discover along the way including Tate Liverpool, the Museum of Liverpool and The Beatles Story.

Liverpool’s legendary Cavern Club is the of hub British pop music and rock and roll. Whilst temporarily shut due to Covid-19, 60 years after its opening, it survives and thrives as a contemporary music venue.

Through seven ever-changing decades, before, during and after The Beatles, this historic cellar has played a role in every style of music, from 1950s jazz to 21st Century indie rock. The Cavern Club is situated along the pedestrianised Mathew St. Take some time to stroll along Matthew St, read commemorative plaques about the club’s musical history and admire statues of stars from The Beatles and surprise, surprise, Cilla Black.

St. John’s Gardens joins onto William Brown Street in the city centre and is adjacent to the magnificent St George’s Hall. The gardens are a great place for a pit-stop to overlook the city and escape the hustle and bustle.

This plot of land was formerly used for the city’s first general infirmary, a church and cemetery, windmills, potteries, marble yards and even a lunatic asylum! The terraced sculpture gardens now display listed monuments from the late Victorian and Edwardian era including:

The Central Library is situated in the middle of William Brown Street (sometimes referred to as the “Cultural Quarter”), a road that is remarkable for its concentration of public buildings.

The entrance to the Central Library is a 22m walkway engraved with famous book, film and song titles. But hidden within the typography is a secret message. This mystery code is purposefully embedded to intrigue the curiosity of visitors.

Of course, it was inevitable that this cryptic conundrum would be incorporated into our Liverpool Murder Mystery Trail, and the peaceful William Brown Street and all its Victorian architecture is an idyllic backdrop.

Call us biased, but we can’t create a list of cool and unusual things to do in Liverpool without adding our Murder Mystery Trail, and it’s for good reason.

Death on the Mersey is a Murder Mystery style treasure hunt that takes you on a thrilling journey past historical landmarks and points of interest in the heart of the city. As you follow the route, you’ll solve puzzling clues to discover pieces of evidence, eliminate suspected characters and weapons, and ultimately deduce whodunit.

As with all our trails, Death on the Mersey is 100% outdoors and makes use of Liverpool’s plethora of public spaces and pedestrian walkways. We firmly believe this meticulously crafted trail is the best way to discover Liverpool.

Numbers 5-9 on the above list can all be seen on the route this trail. To get a more complete picture of what Liverpool has to offer, we recommend doing our Liverpool Murder Mystery Trail, stop off for some refreshments on Bold Street, then walk up the hill to see Bombed Out Church, Mackenzie’s Tomb and St. James’ Cemetery to finish off an epic expedition and complete the entire list!

As you can see, Liverpool is full of unusual and curious things to see and do. But we don’t want to give too much away. There are plenty more hidden gems and historical landmarks to discover in Liverpool, and the best way to see them is with our Murder Mystery Trail – Death on the Mersey.

We hope we’ve helped you plot a killer day out! If there’s something you feel should be featured on this list that we’ve missed, then please get in touch by leaving a comment!

345
SHARES
ShareTweet
Categories: Covid-19, Things to see & do
Leave a Reply Cancel reply
Popular posts
Have you seen our thrilling trails yet?
Lately on Instagram
Been busy doing some different trails recently. Th

It's happening... And with all the classic duck,

I just made my biggest donation to Children In Nee